We are now seeing the return of last century’s eugenicist movement through the popular promotion of sterilization as a method of birth control.

A popular women’s magazine in the UK recently featured an article entitled, Young, Single and Sterilized, in which women in their 20’s discussed why they had undergone an operation to prevent them from ever having children. The article is little more than PR for a “women’s charity” called Marie Stopes International, an organization that carries out abortions and sterilizations and was founded by a Nazi eugenicist who advocated compulsory sterilization of non-whites and “those of bad character”.

In the article, sterilization is lauded as an “excellent method of birth control” by Dr. Patricia Lohr of the British Pregnancy Advisory Service.

The article includes an advertisement that encourages women to seek “more information about sterilization” by contacting Marie Stopes International. We read that, “Over the past year, a quarter of the women who booked a sterilization consultation with women’s charity Marie Stopes were aged 30 or under.” 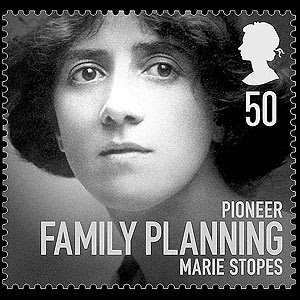 But when a magazine aimed primarily at young women all but encourages girls as young as 20 to have their fallopian tubes tied in order to prevent the “irritation” of children entering their lives and then advertises an organization founded by a Nazi eugenicist that can perform the operation, something has to be amiss.

Even more shocking than this is the fact that the majority of people in the UK routinely express their support for society’s “undesirables” to be forcibly sterilized by the state, harking back to a time when such a thing was commonplace right up to the 1970’s in some areas of America and Europe.

As we highlighted at the time, respondents to a Daily Mail article about Royal Mail honoring Marie Stopes by using her image on a commemorative stamp were not disgusted at Royal Mail for paying homage to a racist Nazi eugenicist, but were merely keen to express their full agreement that those deemed not to be of pure genetic stock or of the approved character should be forcibly sterilized and prevented from having children.

“A lot of people should be sterilized, IMO. It’s still true today,” wrote one.

“Just imagine what a stable, well-ordered society we’d have if compulsory sterilisation had been adopted years ago for the socially undesirable,” states another respondent, calling for a “satellite-carried sterilisation ray” to be installed in space to zap the undesirables.

Shockingly, another compares sterilization and genocide of those deemed inferior to the breeding and culling of farmyard animals, and says that such a move is necessary to fight overpopulation and global warming. Here is the comment in full from “Karen” in Wales;

We breed farm animals to produce the best possible stock and kill them when they have fulfilled their purpose. We inter-breed pedigree animals to produce extremes that leave them open to ill-health and early death. It is only religion that says humans are not animals. The reality is that we are simply intelligent, mammalian primates.

The world population of humans has increased from 2 billion to 6.5 billion in the last 50 years. This planet can support 2 billion humans comfortably. 6.5 billion humans use too many resources and leads to global warming, climate change and a very uncertain future for all of us – humans and all other life sharing this planet with us.

Marie Stopes believed in population control and in breeding the best possible humans. So did Hitler. Neither of the aims are bad in themselves. It is how they are achieved that is the problem. The fact that we still remember Marie Stopes is an achievement in itself.

The nature of these comments is so fundamentally sick and twisted that one is tempted to dismiss them as a joke – but these people are deadly serious. Presumably they would also agree with China’s one child policy, which is routinely enforced by intimidation as young pregnant women are grabbed off the streets by state goons and taken to hospitals where forced abortions are carried out.

Now with popular women’s magazines advising women in their 20’s where they can go to be sterilized and ensure a lifetime of partying and carefree sex, it’s no surprise that experts predict that by 2010 one in four western women will be child free for life.

The yearning to have children is the most beautiful, natural and innate emotion either a man or a woman can possibly experience. That is not to say that it’s always wrong for some people not to have children – extreme circumstances can justify such a decision. But to have yourself sterilized because you find children to be an “irritant” and want to live a life free of responsibility or consequences is an awful message to send to young women, especially in the sex-saturated entertainment culture that we are now forced to endure.

Furthermore, the outright promotion of Marie Stopes International as ‘the place to go’ to get sterilized if you’re under 30 is stomach-churning considering the fact that the origins of this organization can be found in Nazi ideology, racist and backward early 20th century eugenics and a long-standing agenda to cull the population of undesirables, an abhorrent belief still held by elites across the planet today.